Posted on April 7, 2007Categories Japan3 Comments on Day 8 and Counting

Note:  You can view Mick’s pictures of Day 8 here.

It’s tempting to leave the Japan blog as it is–I’ve been home for almost a week and frankly, I’m tired of blogging it.  But there are still two good days not covered and they are begging to be blogged.  So here it goes…

Somewhere along the line, I’d forgotten about the cherry blossoms, because I was surprised to see that the park was absolutely brimming with cherry blossoms and people sitting on blue tarps, enjoying them.

The cherry blossoms aren’t just a tourist attraction–Tokyoites love them too.  And what’s not to love?  I feel so lucky that we got to see them.

The park was absolutely gorgeous.  Everywhere you looked there were cherry blossoms and people.  I did see a number of gaijin in the park, but unlike us, they seemed to be gaijin living in Tokyo.

I guess I could fill this whole post with cherry blossom pictures, so I’ll end it with this one:

Our next stop was to be Meiji Shrine, which is a Shinto shrine dedicated to the souls of Emperor Meiji and his consort, Empress Shoken.  Emperor Meiji was an important figure in late 19th and early 20th century Japanese history and he is known as the symbolic leader of the Meiji Restoration and the subsequent industrialization in Japan.

Like so many historical sites in Tokyo, the original Meiji Shrine was destroyed during air raids in WWII.  The existing structure was re-built in 1958.

There were two weddings going on while we were at the Shrine.  Here is a photo of the bride and groom with their procession:

The wedding photo portion of the event didn’t seem very different from those in America:

About this time, Mick and I were starving so we made our way to what looked like a noodle shop.

Again, no English was spoken, but it was pretty easy just to show them what we wanted since they only seemed to serve two different types of noodles.  Mick tried to order beer by saying “bi-ru,” but apparently he didn’t say it right because the waitress couldn’t understand him.  He ended up just pointing to the picture of Asahi on the wall and that was enough to get us two mugs.

It ended up being one of the best meals I had in Japan.  My noodles were in a very spicy broth and they were simply delicious.

After lunch, we were feeling fortified enough to walk to an area called Golden Gai, which is a small district containing numerous small bars.  When I say small, I mean that some of them only contain like three seats.  Unfortunately, they were all closed this early in the day, but it was an interesting place just the same.  I could imagine what it would be like at night.

Next we made our way to a seedy area of Shinjuku called Kabukicho.  It’s billed as a red-light district, but during the day it doesn’t seem to have much going on. 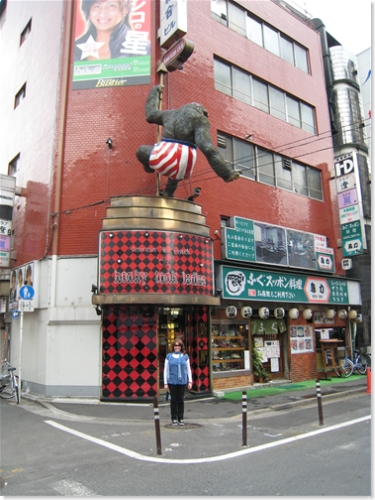 The place in the photo above was called “Honky Tonk Ladies.”  Only in Japan, I’m telling you.

Almost as soon as we walked into Kabukicho I wanted to leave.  Like most of Tokyo, I didn’t feel unsafe, but I did feel uncomfortable.  We made our way back to Shinjuku.

Another Lost in Translation Moment

When we got back to Shinjuku, Mick wanted to go to the Starbucks at Shinjuku Station crossing and look out onto the crossing, like Scarlett Johansen does in Lost in Translation.

Here we are, sitting on bar stools at the window:

And here is the view from those seats:

This is the view of where we were sitting from the outside:

We ended the day with a western-style meal from room service: